Make your favorite chicken and rice dinner at home in the crockpot!  This delicious Crockpot Orange Chicken and Rice recipe is served as a stir-fry with zucchini and peppers.

Many Chinese restaurants in North America serve a dish they call, “Orange Chicken.” While this dish has become very popular in the western world, it’s not common to eat orange chicken in China.  The Americanized orange chicken is battered and breaded bite-sized chicken, with a sweet caramelized orange flavored sauce.

My kids love the orange chicken they’ve tried at various Chinese restaurants, so we attempted to make our own at home!  As long as we had the breaded chicken and orange sauce, we could get creative from there for the perfect veggies to add to it.

How to make orange chicken in the crockpot

What’s in the sauce for Orange Chicken?

Most people don’t know what’s in the traditional orange sauce you get when you purchase orange chicken from a restaurant.  But many copycat recipes have a lot of things in common. Generally, they include:

To sweeten our chicken, we decided to go with orange marmalade.  We love how thick it is, making it easy to get a nice thick sauce. We also used chicken thighs because they stay moist and work well in a crockpot, without getting over-cooked.

We chose zucchini and peppers for this stir-fry because they are in season right now, and they add a nice fresh taste.

You can also include rice or noodles with your stir-fry, and we’ve tried both!

So, there it is! Our favorite crockpot orange chicken and rice. It’s such a great healthy dinner that we know your family will love.

For more of our popular stir-fry or Asian dinners, check out these! 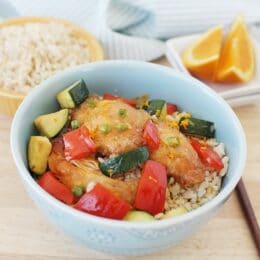 Make your favorite chicken and rice dinner at home in the crockpot!  This delicious Crockpot Orange Chicken and Rice recipe is served as a stir-fry with zucchini and peppers.

Pretty tasty. Quite sweet, which makes it more palatable for children. I set my crock pot for 5 hrs and it was partially overcooked. Will prepare it again and set for 4 hrs.

Kiddos did not care for this, neither did I to be honest. Hubby really liked!

I adapted the instructions for the Instant Pot to reduce the cooking time. Instructions In a bowl, mix the water, orange juice, soy sauce, ketchup, apple cider vin Place chicken in the instant pot. Add sauce and mix together with a spoon Close the lid and pressure cook for 5 minutes Release the pressure and press the saute button To thicken sauce In a small bowl mix water and cornstarch together Add to the chicken Cook for 1-2 minutes or until sauce thickens Remove from pot and serve

I cut to small chicken pieces for kids so 4 hours was too long. Great flavor and family enjoyed it!

I kept the 2 pieces whole and didn’t overcook it then cut the pieces and thickened the sauce on the stove. I had a bitter Orange Marmelade so it was a nice tart flavor that the parents liked! Kids ate some but not much

I was so excited to make this. I set my crock pot for 4 hours and left to run errands. I came home after 3 hours and it is burnt. The chicken is black and tastes burnt. I am so sad and now have to spend money on fast food. 🙁

I ended up using Panko bread crumbs and baking the chicken in the oven for 15 mins instead of using the crockpot. Just poured the sauce over afterwards. Delicious!

Everyone loved it. A little too much orange taste.

Not sure how this is a healthy recipe with the amount of sugar used.

Hi Chris, thanks for your feedback. Yes, there are added sweeteners in this recipe. 🙂 We think it’s OK to “spend” some sugar on a meal if it inspires kids to eat and enjoy nutritious foods they might not normally like. If the amount of sugar feels like too much to you, you can try cutting back on the marmalade. If you do, please let us know how it turns out!

Thank you for sharing this recipe, my family loved it! Thank you to Dustin for providing the instructions to make this in the instant pot.