This Basic French Toast recipe is one you will want for your go-to breakfast recipes. It is incredibly easy, but makes the perfectly soft, fluffy and chewy french toast.

How Do You Make French Toast From Scratch?

The key to an amazing french toast from scratch is basically two things:

Why Is My French Toast Soggy?

If you add too much milk or sugar to your egg mixture, the egg in the mixture won’t cook, which will give you wet, soggy french toast.

What is the Secret to Good French Toast?

There are a couple of tips that can take your french toast game from good to amazing! They aren’t complicated and are easy for every home chef to learn!

Now you are a French Toast pro! Enjoy making this delicious breakfast recipe for your family! 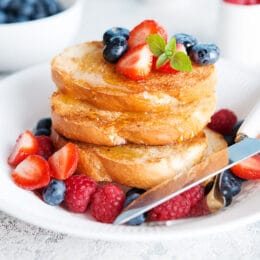 If you want to make savory french toast, leave the vanilla out and season the batter with salt and pepper. To add some sweet flavor depth,  grate some nutmeg and add a pinch or two of cinnamon, all spice and/or ginger into the batter.
Tried this recipe?Mention @SuperHealthyKids or tag #SuperHealthyKids!

Yay! Thanks for sharing!

5 stars with a few changes: I doubled the eggs, and used just a splash of milk for a thicker batter. I didn’t include the nutmeg and eliminated the salt. I melted margarine in the skillet over medium heat and sprinkled a little extra cinnamon on both sides of the bread while cooking. Family loves this recipe! Very easy and very tasty.