Oatmeal with Apples and Cinnamon

One of the classic flavors of those instant oatmeal packets is Apple Cinnamon. They usually have freeze dried pieces of apple, quick oats, cinnamon, sugar and preservatives. It makes sense that they are popular because they are convenient, quick and easy to make and taste good.

The secret to making your own oatmeal, is that it is almost as easy as the packets, tastes so much better and has SO much more nutrition! Fresh apples, sweet refreshing applesauce, chewy old fashioned oats and creamy Greek yogurt make this Apple Cinnamon Oatmeal recipe kick the packets to the curb! 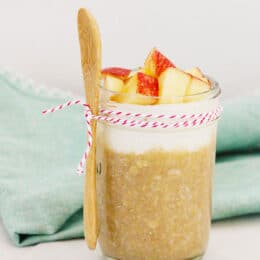