While of course it’s easier to get your pumpkin from a can, and generally cheaper, there are a few reasons you may consider pureeing your own pumpkin!

So, don’t be scared.  Give this simple puree method a try.   Start with a smallish pumpkin, generally labeled: Sugar pumpkins or Pumpkin pie pumpkins.

Instead of trying to get a knife into the super thick skin of these small pumpkins, just put the whole thing in the oven instead. Snap the stem off, stick it in an oven safe dish, and bake at 400 degrees for about an hour.

Place pumpkin flesh into a food processor and puree!  Depending on how good your processor is, and how smooth you like the pumpkin, you can add a touch of water to enhance the smoothness. I used 2 TBL of water for the whole pumpkin.

And that is it!  You can see my fresh pumpkin on the left, and the canned pumpkin on the right.   Just because “theirs” is dark, doesn’t mean it’s a worse product. In fact, I do think it tastes a little better, but only because I’m used to that.  The only ingredient they have is pumpkin as well, ,but I’m sure they use different varieties of pumpkins than I used.  Different pumpkins, different colors. 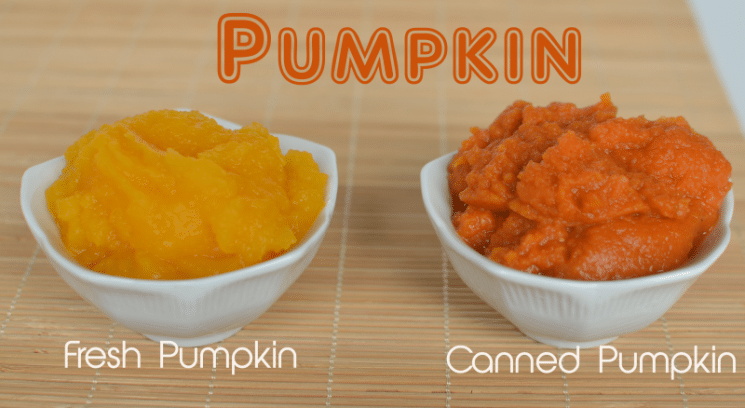 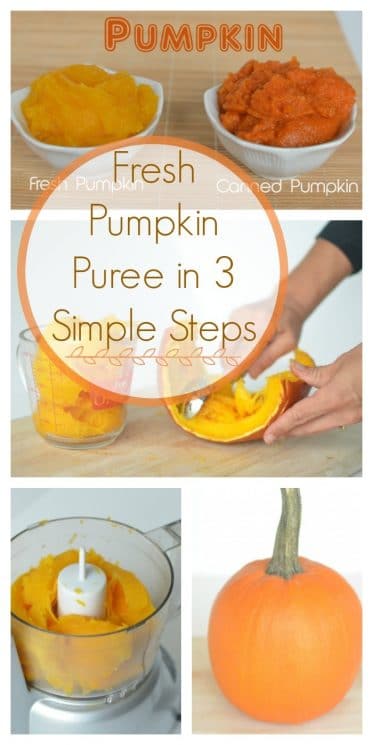 Now, what to do with it?

depending on the pumpkin, sometimes it can get a little watery. you can strain the extra water out by lining a strainer with a paper towel or cheesecloth or coffee filter and the extra water will just drain right off. Butternut squash makes delicious “pumpkin” pies. I’ve had really good luck roasting those super heavy and dense fleshed decorative pumpkins. Some call them Cinderella pumpkins. They come in light orange or a light greenish/blue color. You get a lot of pureed pumpkin from them.

no way! you can cook the pumpkin whole?? that is awesome.

Thank you for the pics! All of the other instructions I’ve seen are so vague, I didn’t even know what kind of pumpkin to buy. Doing this as soon as it gets cold enough here to have the oven on for an hour, haha! Any way to do it in a crockpot??

Yes, you can if your crock pot is big enough! Roast it on low until it’s soft.

Can you freeze the purée?

The canned pumpkin is usually kalabasa from what I understand. That’s why it’s a different color.

You can also use a meat grinder and we do this with our Halloween pumpkins after the kids have carved them too. Also the canned is darker ecause they purée the outside of the pumpkin too. I don’t understand why they do it but they do.

Has I usually use the jack-o-lantern sized pumpkins and they often have to be strained. Does anyone know of a good use for the liquid. I have thrown it away in the past, but wondering if I could save it and bake with it or something.

Also, if you are doing a larger pumpkin and need to clean it first, cut it in half and use the flat canning lid to scrape the insides out. It is round and the edges are just sharp enough to scrape the strings loose easily. Then lay each half upside down on a baking pan and bake as above.

Thanks for taking the intimidation factor out of this process for me!
Do you think this puree would freeze well? If so, for how long?

Another thing you can do is dehydrate the puree then once dry powder it in a coffee grinder for storage (instead of freezing) then you add water to re-hydrate for pie .. makes for a smoother texture this way also…

Yes you can freeze it, we freeze a ton every year!

How about canning? Does anyone can their pumpkin puree? Like making your own pumpkin pie filling and then canning it?

I want to try it, but everyone keeps telling me it’s easier to buy it…ideas and thoughts appreciated 😀

You must pressure can pumpkin which I just find intimidating, much easier to freeze it. But you can add your spices and freeze in the right amount for a pie 😉

You cannot can pie filling. It is too dense. All sources I have read say not to can it because you can’t ensure the center got hot enough when processing to kill the botulism. Even with pressure canning. So I just freeze it instead.

This is great. I always buy the organic canned version at Whole Foods, but I would love to try to make my own. And I could make enough to freeze as others have suggested here!

I was just about to do a search to learn the best way to get fresh pumpkin puree! I have pumpkins ready to turn into something delicious:) Thanks for sharing!

@Jennyandcompany:
I don’t see why you couldn’t do this in a crockpot! Definitely let me know if you try it.

Can you do this with the big pumpkins too?

You definitely can, although the taste might not be as sweet! Pumpkins are squash, and not just for decorations

I was told the really big, big ones don’t have a very good texture. But I have done large jack-o-lantern ones several years. My 12yo son can barely carry it, but it isn’t HUGE.

Our jack-o-lanterns skin was so THICK this year, my husband had to use a power tool to cut into them!
Yeah, I haven’t tried the big ones, so I don’t know how the texture turns out.
Happy Halloween!

I bought an organic long pie pumpkin, in hopes of experiencing the all the sweetness of a pie pumpkin, but in a far larger quantity. It was nice and orange and looked pretty tasty on the outside.

However I became a bit sceptical when I first opened it, because I’m used to be being assaulted by the typical sweet fragrance of butternut squash and also the light yellow flesh didn’t look all that ripe. Worried I decided that if this pumpkin puree didn’t turn out as sweet as I hoped, I’d freeze it and turn it into pumpkin soup later in the month.

My instinct proved more than right. The pumpkin turned out to be terrible! Totally tasteless and stringy. Still, I froze it and am hopeful that I can use it in future scones or other baking where it doesn’t matter if I can taste it or not.

Anyone got any tips for what I can do with bland tasteless pumpkin?
I thought I might add 2 carrots to make it a bit more sweet, but perhaps I should just compost it and be done with it?

They use the skin because it has more flavour, just like oranges!

You can however pressure can it if you cut it into chunks. Just not a puree. So you can it in 1″ cubes, then puree right before you use it.

I used a regular pumpkin once and made my own fresh pumpkin pie. It was the best pumpkin pie I have ever had!

I wonder if you could puree the skin too- has anyone tried it?

the reason canned pumpkin is so much darker, they puree it with the skin, (no seeds). Wah the skin well before cooking. The skin contains a lot of vitamins and nutrients. You just need to puree a bit longer for a good smooth consistancy

So if I make the purée will it be okay for me to can or freeze in canning jars? My husband and dogs are the only ones that eat it and I would love to make it. Thanks for the feedback.

If you cut your pumpkin in half and remove the seeds before baking it…. It will be less “watery”. Also, place it in the oven (in a baking dish) cut side up (to let the moisture out and toast the flesh a little bit.
Also, variety matters some…. The small sweet pumpkis really do make more flavourful purée.

Remember to pierce it; otherwise it could explode hot pumpkin all over you when you cut it open.

I am not familiar with that type of pumpkin, and some are more flavorful than others, but none of them are sweet. Pumpkin pie is sweet because you add brown sugar or molasses or white sugar. If you want it smooth, you need to blend it, otherwise pumpkin does tend to be stringy. Pumpkins, unlike carrots, are not naturally sweet. And most of the flavor of pumpkin pie comes from the cinnamon. Are you comparing your bland pumpkin to just canned pumpkin puree or to pumpkin pie filling, which would have sugar and spices in it already?

I swore years ago that I would never make my own pumpkin puree ever again but this method makes it so easy! I cooked four organic pie pumpkins tonight which yielded 9 pints of puree and not only is it delicious but at 2/$5, cost effective as well.

lots of vitamins and nutrients in the skin

How would you go about freezing this? Some puree in a ziplock?? then can you take it out, thaw it out and use it for pies or? I’ve never made puree (have always bought the canned) but we have pumpkins in our garden this year! (too many to carve)

What would the difference between canning home made apple sauce and pumpkin puree be? I would think apple sauce would be more dense than pumpkin?

Kathryn,
if you follow the canning guidelines by canning companies to ensure safety and quality of your product, it should be fine. I haven’t done it before.

April, I don’t have the answer to that. I would consult a canning site to be sure about the details.

Sandwich ziplock bags hold about 2 cups which is exactly what works for most pie recipes as well as muffins, cookies punkin dump cake…I just fill em & freeze flat so they stack well. Then defrost & toss all into recipe.

After you carve a jack o lantern, how long do you have before you can’t cook it anymore? I mean obviously if it starts to rot its not good but is it like a day? A week? I don’t want to wait until they rot and then I can’t cook them 🙂

Jackie- A jack o lantern woulnd’t be the best pumpkin to puree. Usually the small pumpkins are ideal. Otherwise, if you are using a jack o lantern, I would cook right away, not wait.

how long will it be good in the fridge?

Not very long Kristi- I would use it up as soon as possible, no longer than 3-5 days.

I use butternut squash- or other smooth orange squash- and just peel it. Then I slice it and put it in the blender seeds and all. The seeds have a lot of zinc and other nutrients in them. I add eggs and some cinnamon or pumpkin spice (lately I’ve wanted to use ceylon cinnamon so I just add it first to the blender to break it up) water and add it to pancakes- so so yummy. I’d probably leave the eggs out if I was just going to freeze it in a freezer bag or jar. So easy to add to all recipes.

Have you tried with curry?

You are a very good blogger, you have a good repertoire of spectacular recipes like these, thanks for sharing them, dance cookers