It’s smoothie week at Super Healthy Kids!  Smoothies are a great way to make sure your kids are getting enough of the nutrients they need each day to thrive.  We think of our smoothies like a daily vitamin, with a whole lot of extra benefits. We are careful to make sure not only do our smoothies taste great (so the kids will drink them), but also serve a purpose.  Today’s smoothie was created to support brain health!

The ingredients in our brain smoothie include blueberries, avocado, wheat germ and almonds. Each one has been shown to have mental benefits.

I first learned about the mental benefits of blueberries a few months ago at a seminar for brain health.  After the seminar, I went straight to Costco and bought a HUGE bag of blueberries as I was determined to eat some blueberries every single day!  From WebMD:

“Brainberries” is what Steven Pratt, MD, author of Superfoods Rx: Fourteen Foods Proven to Change Your Life, calls these tasty fruits. Pratt, who is also on staff at Scripps Memorial Hospital in La Jolla, Calif., says that in animal studies researchers have found that blueberries help protect the brain from oxidative stress and may reduce the effects of age-related conditions such as Alzheimer’s disease or dementia. Studies have also shown that diets rich in blueberries significantly improved both the learning capacity and motor skills of aging rats, making them mentally equivalent to much younger rats.

The healthy fats in avocado make them a great brain food. The monounsaturated fat improves blood flow to the brain.  Also, oleic acid in avocados help our brains process information FASTER!  From Healthy Brain for Life:

They are rich in a fatty acid called oleic acid, which helps to build the coating of insulation, known as myelin (found in white matter of the brain.) Myelin helps information travel at speeds of up to 200 miles per hour. Neurons without myelin (gray matter) process information at slower speeds. We can make some oleic acid on our own if we have other good fats in our diet, but avocados are a tasty way to include it in our diet. Oleic acid makes up over a third of the fat in myelin. Thus, avocados are helpful for speedy messaging within your brain.

This one might surprise you.  We use wheat germ a lot in our meal plans, as it is the most nutrient rich part of wheat. Wheat germ a vegetarian source of choline, a neurotransmitter that boosts memory (source), and it also contains vitamin E and some omega 3s.

When rat pups received choline supplements, their brain function is changed, resulting in lifelong memory enhancement. This change in memory function appears to be due to changes in the development of the memory center (hippocampus) in brain. These changes are so important that investigators can pick out the groups of animals whose mothers had extra choline even when these animals are elderly. (source)

And of course, no surprise for brain development, we have almonds!

So, with our 4 super foods chosen, we put them altogether in a blender and made one powerhouse of a smoothie!   Adding some pomegranate juice for flavor, as well as it’s antioxidant benefits, my kids agreed that this smoothie was the best! 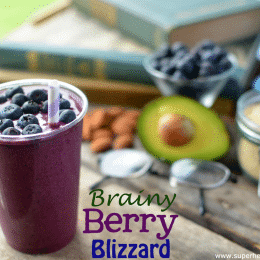 Do you have to store wheat germ any special way?? Do you buy it in bulk? Thanks!!

Marky- I buy the small bag from Bob’s Red Mill and store it in the freezer.

What would you substitute for wheat germ for gluten sensitive kiddos?

I would just leave it out Lynn! You could add flax meal for other amazing reason though if you want to replace it.

My daughter is allergic to peanuts; which means other nuts are out since they are processed on equipment that also processes peanuts. Do you add the almonds for texto or taste? Could I wash them to remove the risk of peanut contamination? Thanks!

My daughter is allergic to peanuts; which means other nuts are out since they are processed on equipment that also processes peanuts. Do you add the almonds for texto or taste? Could I wash them to remove the risk of peanut contamination? Thanks!

What is the nutritional value of the smoothie?

How many grams of carbs. are in one smoothie ?

How many grams of carbs. are in one complete smoothie ?

What brand is a good high powered blender ?

I use chia seeds in our smoothies.

i wonder what tasty is? did you always served cold?

I am interested in adding kefir to smoothies for my children. Do you think you could add milk kefir or yogurt to this ?

My son is also allergic to peanuts – I have never heard of washing something to remove the risk of peanut contamination, and would not risk it. I use a brand of almonds called Blue Diamond which says that is peanut free on the package. I have also found that Costco (kirkland) brand almonds do not have a risk of cross contamination with peanuts. (But do always check the package first!)

Thanks Dawn! Will do. I can’t wait to try it with my girls.

@April- we haven’t evaluated this smoothie. You can do this on nutritiondata.com
@Terra- we love both the blendtec AND vitamix. Really, both are quality blenders, and you’d be happy with either. Many people also love the nutribullet!
@genet- that’s a great addition!! It would make it so creamy and yummy!

is there something else i can add instead of the avocado my son is allergic..

I would leave the avocado out, and replace it with flax seeds or chia seeds for those healthy fats. @yanet

we give them daily or 5 times a week?

Could you make this up in advance ant keep it in the fridge?

what could you substitute for almonds for a child with nut allergies??

@Abir- You can definitely give them smoothies every day, but it isn’t necessary.
@Melissa- we do that.. Just make sure to give it a nice shake because the ingredients will separate.
@mandi- I would just leave it out or replace it with a brain healthy seed like flax seeds.

Hey I am so happy I found your website, I really found you by accident,
while I was browsing on Yahoo for something else, Regardless I am here now and would just
like to say kudos for a fantastic post and a all round entertaining blog (I also love the theme/design),
I don’t have time to browse it all at the minute but I have bookmarked it and also added in your RSS feeds,
so when I have time I will be back to read much more, Please do keep up the excellent b.

Wow, that’s what I was exploring for, what a information! present here at this web site,
thanks admin of this web site.

I quite like reading through an article that will make people think.
Also, thank you for permitting me to comment!

Hey, thanks for the post.Really thank you! Really Cool. befbbbcgbgab

Hey there! I realize this is somewhat offtopic but I had to ask. ekefdaefbccddddk

I seriously love your blog.. Pleasant colors & theme. Did you make this amazing site yourself?
Please reply back as I’m looking to create my very own website and want to know where you got this
from or what the theme is called. Kudos!

Can I simply just say what a relief to uncover
somebody that truly knows what they’re talking about on the internet.
You certainly know how to bring an issue to light and make it
important. A lot more people ought to look at this and understand this side of
the story. It’s surprising you are not more popular since you most certainly possess the gift.

Vitamix!!!! Expensive but worth every penny

Vitamix. I love it. You can make frozen treats (kinda like ice cream), soups, anything really. YouTube it, it’s amazing!

First Ive heard of an avocado used as a sweet particularly in a smoothie. Im only familiar using it in salads or with salt, oil & vinegar.
Im curious… This should be interesting.

I buy the 12 oz mason jars and freeze anything I make/juice for up to a week, put in the fridge the night before and drink in the morning.

frozen banana will give the smoothie the smooth texture similar to the avocado and flax seeds or coconut oil for some added fat.

Enjoyed examining this, very good stuff, thankyou . While thou livest keep a good tongue in thy head. by William Shakespeare. egebckegfadf

Could you still freeze it if you’re adding protein powder too? I know extreme temps change the consitency of the protein when mixing but what about AFTER it’s diluted?

We always have Samantha-the consistency hasn’t changed enough for me to notice.

if you don’t have a high powered blender, could you use almond milk instead of the almonds?

coukd I use cashews instead? My little guy has an allergy to almonds

Wow! This smoothie tastes amazing! I love how creamy it is with the avocado! Thank you SO much for sharing this recipe! We are totally hooked on it! YUM! If I run out of Pom, I think I’ll substitute grape juice & just watch the sugar content.

The dish is delicious.I tried it and my kids love it.I want to thank you for this Informative and interesting blog.

We make almost this exact same smoothie every day of the week (it’s so easy!). We don’t have the
almonds – but will try adding those too. Here’s how we do it: http://diy4you.me/smoothies-for-days/

My kiddo is allergic to nuts and avacado 🙁 what could I replace those with?