Adding bell peppers to this homemade pizza recipe can turn it into a rainbow!

We love this rainbow bell peppers pizza because the colors are so fabulous, the taste is amazing, and kids can’t get enough of it!

What are the benefits of bell peppers?

What’s the difference between green and red bell peppers?

The most common colors of bell peppers are green, yellow, orange and red. More rarely, brown, white, lavender, and dark purple peppers can be seen, depending on the variety. Most typically, unripe fruits are green or, less commonly, pale yellow or purple. Red bell peppers are simply ripened green peppers  although the Permagreen variety maintains its green color even when fully ripe. As such, mixed colored peppers also exist during parts of the ripening process. Green peppers are less sweet and slightly more bitter than yellow or orange peppers, with red bell peppers being the sweetest. The taste of ripe peppers can also vary with growing conditions and post-harvest storage treatment; the sweetest fruits are allowed to ripen fully on the plant in full sunshine, while fruit harvested green and after-ripened in storage is less sweet.

How to include bell peppers as a pizza topping

To use bell peppers for our pizza topping, we sauteed them in a skillet to soften them up and to bring out the flavor a bit.

First, we sliced and chopped!

Then, drizzled about 1 tablespoon of olive oil into the skillet.  We cooked the peppers one color at a time, just because we wanted to arrange them separately on our pizza.

We cooked our pizza crust first.  Spread pizza sauce, mozzarella, and Parmesan cheese on top of the crust. Then, after cooking our peppers for only about 3-4 minutes, we topped the crust with the peppers.  Then, we returned our pizza to the oven and cooked just long enough for the mozzarella underneath to melt. 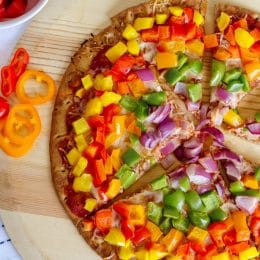 That’s all! The kids love having this pizza!

Pretty and my kids liked it, but it took so long to make. I added previously made beef and olives to the sauce.

Love this idea and it is so pretty too as well as being healthy!

I used a fresh whole grain pizza dough ball I got at the grocery store instead of making the crust from scratch. It really saved a lot of time.