Chicken tetrazzini gets a makeover! It’s now packed with extra veggies, made with whole wheat noodles, and simmers in a lighter sauce. It’s a quick weeknight meal that is sure to win the kids over.

Something about pasta makes it so very comforting! But it often gets a bad rap. True, many pasta dishes are not make with good nutrition in mind, but that doesn’t mean all pasta should be off-limits! In fact, pasta is great when eaten in moderation.

We decided to make-over chicken tetrazzini because it’s such a popular family classic. Now you can enjoy it without the guilt!

Here’s what we love about this healthier chicken tetrazzini recipe:

So go ahead, enjoy some pasta! You can know you’re fueling your family with great stuff.

How to Make Chicken Tetrazzini

As always, begin with prep. Luckily it’s pretty simple! Cut the chicken into small cubes, dice the yellow squash (zucchini also works), and mince garlic. If you didn’t buy pre-cut mushrooms, also slice those. (But seriously, buy them pre-cut if you can – they’re the same price and save you a few minutes!)

Grab a large pot (everything will need to fit into here eventually) and heat it over medium heat. Melt 2 tablespoons of butter and then sprinkle in a tablespoon of flour. Whisk it for a minute or two – it will become clumpy and then smooth out a bit. (This is called making a “roux.”)

Remove the pot from the heat and add a tablespoon of milk and whisk well. Add another tablespoon and whisk again. Repeat a few times and then add all the rest of the milk. Return to the heat and bring to a boil.

Once the milk boils, add 1 pound of whole wheat noodles. I used thin spaghetti, but really any pasta will work! Fettuccine is commonly used. Cook pasta to al dente according to the time listed on the packaging.

Now for the chicken and veggies

While the noodles are cooking, heat a large frying pan over medium-high heat. Add a tablespoon of olive oil and then the mushrooms and chicken. Saute for 5 minutes, until the chicken is mostly not pink.

At this point, add the yellow squash/zucchini and garlic. Saute for another 5 minutes, until the chicken is cooked through. Salt and pepper generously.

Time to put it all together

Now dump all the veggies and chicken (including and liquid) into the noodles, and place the pot over low heat. Add frozen peas (or fresh, if in season), Parmesan cheese, 1.5 teaspoons salt, and 1/4 teaspoon nutmeg.

Mix until evenly mixed and creamy (not soupy). Serve warm with extra parmesan cheese, if desired.

Some chicken tetrazzini recipes also call for a bake at this point — so if that’s how you like it, go ahead and follow your preferred method. But personally, I like one less step! 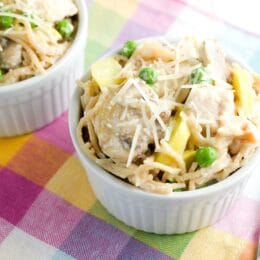 This was just meh. I can’t get over the fact that it just tastes like hot milk and spaghetti. My toddler wasn’t a fan 🙁