When you think of Rhubarb, is the only thing that comes to mind Rhubarb Pie?  One year my friend grew some rhubarb in her garden very successfully, but she told me, “We could only eat so much rhubarb pie, you know!”

But this Strawberry- Rhubarb – Applesauce is totally worth growing some rhubarb for, or at least buying some.

How to find rhubarb:

The Sauce was super easy.  We used:

Boiled in water about 10-15 minutes until apples and rhubarb were soft enough to easily slide a fork into.

Then Put the apples and rhubarb in a blender, along with

MMMM, We Love this applesauce!!! 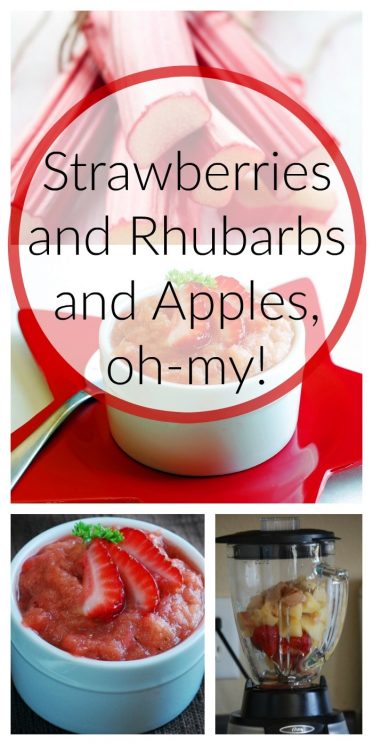 Why should you include Rhubarb in your diet?

Anyway- I’m out! Have a great Tuesday… be back tomorrow with, who knows what!

[…] This post was mentioned on Twitter by Healthykids, Healthykids. Healthykids said: Strawberries and Rhubarbs and Apples, oh-my!: When you think of Rhubarb, is the only thing that comes to mind Rhub… http://bit.ly/cle5vd […]

We have rhubarb that grows in our yard every year and I never know what to do with it. I’m going to go cut some today and try out this applesauce! Thanks!

This is such a good idea! I love rhubarb, but usually just use it in pie. We’re starting a new feature tomorrow on our blog:
http://blog.foodonthetable.com/2010/06/introducing-no-whine-wednesday-with-chef-tracy/

I hope you will consider linking up!

i think rhubarb is from the celery family–so that kind of makes sense with the whole eating it with sugar–don’t you eat your celery with salt on it?

Hi Amy! Just wanted to let you know that my entire family was OVER THE MOON about the blueberry oatmeal bread! Seriously, the loaf didn’t last 24 hours. I’m going to try this applesauce tonight and see what happens. I want my family to eat rhubarb just to expand our horizons but rhubarb pie is always loaded with sugar – this could be the alternative we’ve been waiting for 🙂

I am making this tonight for my super picky 20 month old. Hopefully he loves it! 🙂 He needs some new veggies in his diet.

I have never tasted rhubarb or made applesauce, but this good. I may expand my horizons.

Looks great! What kind of apples did you use? Thanks!

I’m pretty sure they were gala apples

It’s true that rhubarb is a good source of fiber. And heaven knows most americans could use more fiber! I used to have my own Strawberry patch in California, so you know i love Strawberries. This looks t/b a good recipe 4 me.
And I love applesauce, so thank you..

Rhubarb should always be pulled and not cut..that stimulates new growth…its great as a base for barbecue sauce and it also makes a great chutney or relish combined with vinegar sugar, craisins apples and red onions…we use it for sooo many things!!

I used to think rhubarb needed a lot of sugar to be paletable. I have a very productive plant in my garden – nothing kills that thing!! About a year ago I experimented with putting it in my green smoothies in the morning with a few strawberries. Wow! Who knew it could be so good! Seems to be a natural thickener as well. Glad to see some nutritional information on it. Now if only you could use the leaves … Always feels like such a waste disposing of them.

I have made a Strawberry / Rhubarb jelly for years that seems to disappear when the kids come and visit. I’m not only going to try your recipe but if we all like your applesauce, I’m going to try stretching my jelly recipe by adding apples.

Mm it sounds good maybe I can can som this spring