This one pot meal is quick and delicious! Think creamy chicken fettuccine Alfredo plus spinach artichoke dip. A creamy chicken alfredo pasta lightened up by using milk instead of cream and adding some spinach and artichoke.

What a hit! This meal is a winner on every level!

I’m definitely putting this on our regular dinner rotation. Plus, it saves well for freezer lunches or future dinners.

Get ready for this – all you need is one pot, a cutting board, and a small bowl!

In a large pot, saute the chicken pieces and three minced garlic cloves in a tablespoon of olive oil until the chicken is cooked.  Then add three tablespoons of cream cheese and the chopped artichoke hearts. Stir until the cream cheese is melted. Scoop everything into the small bowl and set aside.

A note on cream cheese: lately I’ve been using Greek yogurt cream cheese and I really like it. It’s lower in fat and higher in protein so I highly recommend it if you can find it. If not, reduced-fat or regular cream cheese will work well too.

Pour in 5 1/2 cups of milk (I used 2% but any should work) into the empty pot and bring to a boil, stirring occasionally to prevent scalding. Once boiling add 1 pound of noodles and a tablespoon of oil. If you can find whole wheat and your family will eat them, they are always a better option!

Cover the noodles and reduce heat so that the noodles cook at a low boil. Cook the noodles until al dente. This will take around 10 minutes, give or take depending on the noodles (see package directions for guideance). There may seem to be a little extra milk, but this will all get absorbed over time.

Now add back the chicken mixture as well as 6 cups of spinach (I used bagged baby spinach). Add 1 teaspoon of salt. Over a medium heat, stir occasionally and cover until the spinach mostly wilts. Now add in 1 cup of parmesan cheese and stir again until everything is combined.

What are you waiting for? Make this some spinach artichoke chicken fettuccine alfredo tonight! 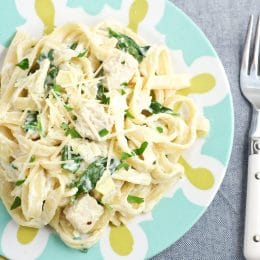 This is a great recipe we loved it! I used whole wheat pasta it was delishious I’ll make again!

Glad you loved it Terri! It’s going on my regular rotation too!

How long do I cook it if using fresh artichokes? Thanks!

Hi Susan, I haven’t tried this recipe with fresh artichokes. Since artichokes take longer to cook than this pasta, it may be best to cook them ahead of time. Here’s a helpful tutorial: http://www.simplyrecipes.com/recipes/how_to_cook_and_eat_an_artichoke/

Do you think if I used sour cream instead of cream cheese the recipe would work?

Do you make any changes when freezing this? How do you freeze/reheat this meal?

Is there a way to know that calorie count per serving?

Hi Stephanie! We’re working on getting nutrition facts directly on the recipes. In the meantime, all our recipes have nutrition facts attached to them in the free Prepear app, which you can get here: https://www.prepear.com/

How many servings is this recipe supposed to be for? 4 servings, 6 servings, 8?

Hi Becca, there are 8 servings in this recipe.

I may try to par boil the noodles in water and then add to milk as I had big issues with the noodles clumping together. I kept a close watch and stired, but still happened My guests loved this and had 2-3 helpings! So a keeper for sure.

Thanks for sharing this, Natalie. You’ve made it look so simple!

I tried your recipe, and my son loved it. I believe this is the only way to make my son eat spinach. Thank you so much for sharing it, grateful!