My daughter has been begging for soup in a bread bowl for months. Now that fall is officially here, I finally said yes. And she told me I was the best mom in the world!

How to Make Loaded Baked Potato Soup in Bread Bowls

To make the bread bowls, we followed the recipe for 5 Minute Artisan Bread.  As long as you remember to do this early enough in the day, it will come out perfectly.   I mixed up the dough first thing in the morning, and let it sit all day!   Then at about 4:00, I divided the dough into grapefruit sized balls, let them rise a little longer, and then baked them.

While the dough was rising, I also peeled and chopped the potatoes for the potato soup.  (full recipe below).

The children approved and there were NO leftovers!

Now, lest you think your family should be cutting potatoes out of your diet, think again!  Potatoes have:

So, pick up some potatoes at the store today and make some soup!

To make the bread bowls, the recipe is below.  we just make mini artisan loaves, and cut the top off, and dig out the inside! 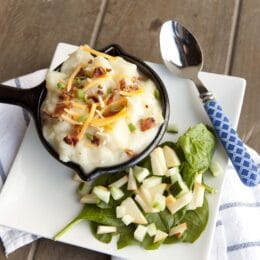 This looks so yummy! We’re having company later this week and I’ll be making this for them! Looks so tasty!

This looks really tasty. Do you know how many pounds of potatoes you used? Small potatoes seems subjective.

It ended up being about 8 cups worth of chopped potatoes. This recipe works with any amount though. Just depends on how thick you like it!

I’ve been craving some good potato soup now that it is fall, and think I’ll be making this recipe this weekend! Thank you!

I made this yesterday (minus the breadbowls) and added 3 finely chopped carrots when I sautéed the onions & garlic. I used an immersion blender to smooth it all out. It was DELICIOUS!!

You can see why my daughter has been asking for it all summer! huh?? Glad you liked it too!

OMG this look incredible. I love potato soup and I especially love it when it is in a bread bowl. So good.

Success! I made this for the second time and I just served bread on the side this time. I used rolls the first time and the flavor was good but I don’t think I presented it well. This time I made the soup and served it with a baguette and it was a success. We used unsweetened soy milk and it was still yummy. Thank you for a fun fall recipe!

Thanks for the feedback Lisa! I’m glad soy milk worked- We’ll have to try that.

With all the wheat sensitivities in people have you tried using other organic nonGMO types? Maybe brown rice, Kamut, Teff, Spelt?

I had baked potato soup while in florida at the cheesecake factory. Lived it then so going to try your recipe

Hi! I so want to try the recipe, but I was wondering, can The «better than bouillon paste» be replaced by something else? I am not sure my grocery stores has it…. Thanks!

Yes, just use a tablespoon of any bouillon!

Hi, I tried this recipe today with a bread bowl and it tasted amazing, thank you!

but are there any tricks to make the bread bowl less absorbent? had to pick up a phone call today, when i was done, the bowl sucked up all my soup!

Hi, I tried this recipe today with a bread bowl and it tasted amazing, thank you!

but are there any tricks to make the bread bowl less absorbent? had to pick up a phone call today, when i was done, the bowl sucked up all my soup!

Oh no! Eugene- we’ve always eaten our soup too fast, we haven’t had that problem yet.

Hello, thanks for the recipe. If you are vegetarian, what can you replace the bouillon with?

what can I use instead of bullion? I don’t use anything with msg.

I don’t eat msg either Susan. I always make chicken broth from real chicken. Great soup and great idea with the bread bowl Amy, loved it! ( the whole family loved it :))

How many people does this serve

You could try a Potassium Broth (found on the net). The OTC bouillon has msg in it which no one needs in their bodies.

I am a not the most practiced cook, but my milk/water blend is not thick! It is very runny. Ideas on how to fix it or where I may have gone wrong.

i would assume 8 since you make 8 bread bowls….

Sorry to be ingorant, but writing from England – is TBL a tablespoon?
Thanks

Sorry Sarah- I’m going to try to fix all those for everyone. It is tablespoon!

Thanks. 🙂
Not s big soup fan myself but this looks tasty.

Gmos are fine. Lose the sugar

I have the same question as another user. How can it make it vegetarian? Just use veggie broth?

My soup is very runny to. I understand the making the roux with the flour and butter. But you use the butter to saute the onions first correct? I’ve stopp e d adding water at 2 and a quarter cups I’m going to finish my 4 cups of milk and let it simmer down for a while. I added carrots and celery with the green I onions sautéing them as well. Maybe adding the potatoes will thicken it? Hehe I’m cooking right now

Awesome recipe 🙂 my eldest has allergies so I eliminated the dairy and used non-soy alternatives. I didn’t have whole wheat (was still amazing). This was INCREDIBLE!!!! How successful would I be making two loaves instead of 8 bowls?
??

Thanks Jaime!! That is awesome.

How did it go Amber? Sometimes just cooking it LONGER makes it thicker, as the moisture/water has time to get released.

It turned out very good. Everyone loved it. I wish I would have made the bread bowls but I’ll save it for another time. Just didn’t have to the time. The soup thickened up when I put the potatoes in. I mashed them a little with my spoon.

These bread bowls looks yummy and thanks for sharing this article.To buy more dinner bowls you can visit below website.

Do you think I could use Yukon golds? Thanks

Definitely Kelly- any potato will do.

Hi can you find the chicken base stuff in the supermarkets in Australia? od is it order online only. Or is there a Substitute ? I cant find it in stores.

Marie, If you can’t find it, you can just leave it out, and when the water goes in, replace it with some chicken broth!

Hi Amy. I’m looking to make this on the weekend and went to the store (in Canada) and see there are several types of yeast as options to buy. What kind of yeast would you recommend (active dry yeast, instant dry yeast, etc)? Thanks!

Stefania- I’m not a good enough cook to notice any difference in the yeasts, and how they affect my breads. Honestly, I’ve used a variety and they’ve all turned out fine! LOL

Active Dry Yeast. This bread dough stays great in the fridge for quite awhile. ..look up ‘5 Minute Artisan Bread’ online for full details. It’s excellent! Becomes more of a sourdough as time passes. Anyway, Active Dry Yeast is what’s typical used in recipes or it specifies for Instant. Active Dry Yeast stores great in the freezer in an air tight jar/container, too. I hope this was helpful for you. Enjoy bread making!

Would half snd half instead of milk work? It just sounds like it would make it more thick and creamy

The soup is delicious but that bread recipe… Oh my, I’ve been making it so often since I first saw this last summer. It’s so good and so easy. It makes the best pizza dough too, we have homemade pizza weekly now.

The bread recipe was great! But the instructions were missing the second rise time (I went to the SHK website to double check). The soup was disappointing, I think because of the potato water that I was instructed to add back in. It would taste much better with just milk in the soup base!

These bread bowls looking so delicious and thanks for posted this article its yummyful.

Are there actually 1606 calories in this soup with bread bowl? How much without the bread bowl? Also, are the calories for both soups or only one of them. Thanks for your response!!

Its a good recipe and makes a lot. I only wished the potatoes were represented using a weight (i.e. pounds, ounce, etc) instead of 15 small.

Delicious! A few modifications to make it dairy free such as using Almond milk and Smart Balance butter. Had to increase to 1/2 cup flour to thicken. Quick and easy to make!

I subbed chicken broth for the potato water instead of boullion bc I didn’t have any. Turned out great!

Not my favorite but the kids ate and like it.

Ended up cutting up way too much potato, but soup was delicious!

A little bland but came out nicely

Delicious soup. My kids kept commenting on how good it smelled while I was preparing it. The quality of the bouillon matters.

I added some chicken to it and it was brilliant, but I think I will add some leaks next time, it would be even better with them in it! Yummm!

this recipe does not go into much detail. literally does not even say when to add the potatoes and is not accurate about which pot to cook certain stuff in. Hard to follow.

Hi Zack, thanks for reaching out. I reviewed these recipe directions and the info looks like it’s all there to me. (Check out step 6 to know when to add the potatoes.) I did clarify in the recipe which pot is which, and I hope that helps you have an easier time cooking. Cheers!