You’ll feel lucky you found this healthier version of Irish chicken and dumpling soup – it’s so hearty and delicious! We added extra veggies, cut out unnecessary fat, and made our dumplings out of whole wheat.

I first made Irish chicken and dumpling soup in college. I hosted a group of friends for dinner on St. Patrick’s day – and it was a hit!

Since then I’ve made healthier changes here and there, and each has only made me like it more! I’ve omitted canned cream of chicken soup or cream and made dumplings out of whole wheat instead of Bisquick. I’ve added extra veggies too, of course.

What we love about healthy chicken and dumplings

Of course we love the veggies! A few stalks of celery, a handful of carrots, a cup of peas, and a couple of potatoes. Boil this all up with some chicken breast and whole wheat dumplings and you have quite a well-rounded meal.

The soup base is simply low-sodium chicken broth. I worried we might miss the creaminess of adding condensed soup, but I don’t miss it one bit. The dumplings let off extra flour that helps to thicken the soup really nicely.

Whole wheat dumplings really help make this a filling and healthy meal too. They are definitely distinctly whole wheat, so if your family prefers regular flour that also works. Whole white wheat would be ideal if you want top nutrition with less wheat-ness. Olive oil was a great alternative to butter that is used in some dumplings, and they still turned out fluffy and well-cooked.

First chop your carrots, celery, onion, and potato. Potatoes took the longest to cook for me, so I recommend cutting them on the small side. Also slice up the chicken breasts into thin, small strips. You’re welcome to use thighs if you prefer – I have heard they work wonderfully.

Dump all veggies, onion, and chicken into a large pot. Add salt, pepper, thyme, and low sodium chicken broth. Bring the pot to a boil, stirring occasionally. Then cover and turn down the heat to medium-low and allow it to simmer for 10 minutes.

Meanwhile, mix up the dumpling dough. In a small mixing bowl, add flour, salt, and garlic powder. Add milk and oil and mix until combined.

Once the pot has simmered for 10 minutes, bring the heat back up to medium-high and add a cup of frozen peas. At a rolling boil, drop teaspoonfuls of dumpling dough into the bubbling pot. Once all the dough has been dropped in, cover the pot once more.

Keep the pot covered for 15 minutes and reduce heat only enough to keep the pot from boiling over. You need to keep a boil going but don’t want a mess. Do not remove the lid during this time, since the dumplings are not only boiling but steaming.

Check your veggies and chicken to make sure they are cooked through (they should be). And that’s it!

How to Make a Perfect Dumpling

Here are my tips on helping your dumplings come cooked, fluffy, and not gooey.

Sometimes making dumplings takes a little trial and error, so don’t be discouraged! It’s pretty fun to make and eat them once you get the hang of it.

Enjoy this hearty soup with a side of Irish soda bread! 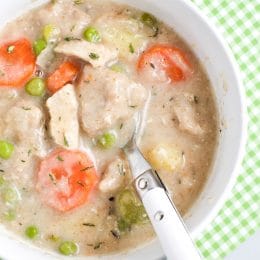 Could you adapt this to be made in the crockpot? Also any suggestions on gluten free dumplings? Thanks I love all your recipes!!

Thanks Sara! Yes, I’ve done it in a crockpot… it’s just been a while. I believe I cooked it on high for about 4 hours and just added the dumplings for about the last 30 minutes or so, keeping the lid on so they cooked. I haven’t tried gluten free, but it looks like there are recipes out there using gluten free flour and they seem to work. Let us know if you try it!

Giving this a try tonight. CANNOT wait! We were supposed to have it for dinner on Friday (St. Patrick’s Day) but time ran away on us and we didn’t have time, so we had leftovers LOL! My husband and son are waiting patiently for their dinner. 15 more minutes! YAY!

Too funny! I think it’s a great soup to have any day, so I am in support 🙂 I hope you liked it!

Turned out better and easier to make than I expected. Thanks for introducing us to this irish dish!:)

This recipe is sooo good. I used half a chicken and removed the skin. I did add garlic and adjusted the amounts of the ingredients according to the size of the chicken. I added the potatoes later during the cooking process. I also made the dumplings- delicious. (Denser than dumplings made with white flour)
I made it a second time, but this time I am making mini cornbread muffins.

This is one of the greatesf things I’ve ever made. EVER. The only thing I tweaked was to add just a tad bit more salt. It’s pretty perfect as-is and super easy too!

Can u tell me the sodium per serving?

Hi Kathy, We’re working on getting nutrition facts on all our recipes, but we actually don’t calculate sodium yet. You can calculate it yourself here: https://nutritiondata.self.com/

What is the sodium in this recipe?

Hi Kathy, we’re working on getting nutrition data for all our recipes. We haven’t gotten to this one yet, but you can calculate it yourself here: https://nutritiondata.self.com/

I can’t wait to make this on my day off. Chicken and Dumplings is my favor. I could not find one that was healthy. Thank God I found you!

Delicious!! My husband Loved it too!

It tasted yummy. However, my dumplings seem to have dissolved into the broth? I dropped them in at a high boil and the pot looked full. Then when I checked on them, the soup had thickened nicely and looked as though most of my dumplings were gone. Where did I go wrong? I’m sure my 1.5yo and 4.5yo wont notice the difference, but I was really looking forward to dumplings.

Hi Sam! I’m glad your soup turned out yummy, and I’m not sure how that happened with the dumplings… perhaps next time try compressing them a bit so they’re less likely to fall apart. I hope your kiddos liked the soup anyway!

Been making this for years now and just now figured I should leave a review. It’s one of our favorite recipes ever and we make it every few weeks!

Thanks so much!! I’m so happy to hear that it’s a favorite! We love it too. 🙂