Before any of you say, ‘My kid will never eat that’ I would tell you to read on.  For some reason, mushrooms seem to be the ugly duckling of the vegetable world, (technically they are a fungus) right along side of Brussels sprouts.  Is it the texture, the flavor, the appearance?  The flavor of most mushrooms is generally mild, and so I would probably rule that out.  The appearance…….hmm, I’m not sure they are any more weird looking than asparagus, or an artichoke.  But texture, definitely a strange texture.  A little spongy, sometimes slimy, or rubbery.  I can see why kids might not like the texture.

This Veggie Stuffed Mushroom Recipe is intended for kids who are definitely new to the world of mushrooms, and are on the fence about even looking at them let alone eat them, and also for the seasoned mushroom eater.  It is 2 recipes in one.

For the seasoned mushroom eater we have:

And for the beginner mushroom eater we have:

The dip is a delicious blend of chopped mushroom stems, onions, garlic, spinach, red bell pepper, cream cheese and savory Parmesan cheese.  It is good enough to stand on its own, and I may or may not have eaten some with a spoon while I was making it.  Take this dip, and stuff it in a mushroom, and you have a delicious appetizer, snack or side dish.  Really everyone wins here.

So, you really aren’t supposed to ‘wash’ mushrooms.  You are supposed to rub them with a damp cloth. This takes patience, and sometimes I just wash them.

Serve the dip with your favorite cracker or tortilla chip at a party or as a snack.  It is savory and warm, and a great way to get your kids to try mushrooms (and a bunch of other veggies!) 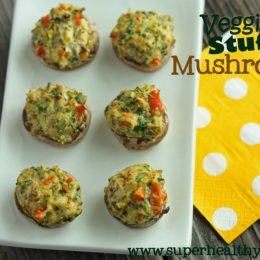 Yes you could definitely do this. Yummy!

Hi, when do we add the onion and garlic to the rest of ingredients?
Thank you 🙂

Hi! I’m new to your site and I’m very exited but I’m also very nervous. I’m just worried that my very picky 4 year old won’t even try these recipes if I just pack them in her lunch box. would it be better if I introduce these when she’s home with me?

I would love to try this recipe for my toddler but her diet is dairy free. Can you think of anything that would work well substituted for the cream cheese and parmesan cheese?

It’s not portabella mushrooms in the picture and those seem really big for a snack so I just got brown mushrooms. Cooking this week and will see how it turns out.

Can I use button mushrooms for this recipe?