Check out our Ultimate Guide to Spaghetti Squash for TOP tips on cutting and cooking spaghetti squash that you won’t find anywhere else.

Slicing a spaghetti squash is one of the hardest things I have ever had to cut in the kitchen.  It has a thick, tough rind that makes even the sharpest knife difficult to cut through.  If you cook the squash whole in the Instant Pot, then you don’t have to cut it until it is already cooked!  Piece of cake.

Just pierce the squash with a knife to vent, and then place it on the trivet with a cup of water in the pot. Cook on high pressure for 15 minutes for a 3-pound squash. (If your squash is larger, I’d add 3 more minutes to the cook time.) Allow the pressure to naturally release for 10 minutes before manually turning the pressure release valve to venting, then use heat-proof oven mitts to remove the squash. You may want to let the squash cool slightly before slicing it in half and removing the seeds with a spoon because it will be HOT!

How Do you Cook a Spaghetti Squash?

What To Serve with Spaghetti Squash

Spaghetti squash is hearty enough to be served as the main dish of a meal, but it is a vegetable and so the dilemma is what to serve with it?

Spaghetti squash is an easy, tasty, veggie side dish.  We love it because it has so much nutrition in it and gives us variety when we are trying to include different vegetables in our diet.

Spaghetti squash is also rich in the B vitamins riboflavin, niacin, and thiamin. Folate is also found in this bright-colored vegetable.  It is high in potassium, manganese, calcium, iron, phosphorus and zinc.  Another reason to eat it is for its omega-3 and omega-6 fat content.

Some people like the fact that this squash resembles spaghetti but is a lot lower in carbs and calories.  It can be a great pasta substitute for people who are watching both of these. 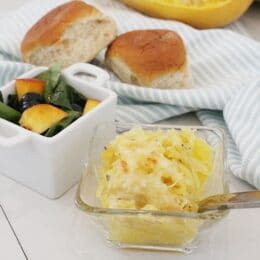 Thank you so much for sharing this recipe.