Home > How to Make Homemade Cream of Chicken or Mushroom Soup

But I have good news! Now you can have all the comfort and taste of condensed soup casseroles without the guilt!

And the second best news? It’s super easy. And it tastes BETTER than the canned stuff. I know, seems too good to be true. But this is real, everyone! I’ve tasted it and can’t go back.

What’s in this soup, you ask? Only four wholesome ingredients I’m sure you already have! A little butter, flour, milk, and chicken broth. That’s it!

Sure, it’s got butter, but fat isn’t all bad! We need some to help us absorb all the goodness of the veggies we eat. So don’t let the butter deter you.

I also love that these homemade chicken and mushroom soups let you control the amount of sodium you get. Using low-sodium chicken broth works great, and I didn’t even feel the need to add any extra salt. So there is plenty of flavor with much less sodium.

Here’s the breakdown: store-bought cream of chicken soup contains 2,175 mg of sodium per can. This recipe (which makes the equivalent of a can) of homemade contains 610 mg of sodium. That’s 3.5 times less sodium – homemade is insanely better!

I even got curious and made a version using whole wheat rather than white flour and it worked great! If you choose to do this, I recommend using 2 tablespoons of flour rather than 1 because it seems to be a little less effective at thickening.

How to make homemade cream of chicken soup

Begin by making a roux: melt the butter in a saucepan over medium/medium-low heat and then whisk in the flour. Continue whisking until smooth and bubbly. At this point, remove your pot from the stove and add in your broth and milk VERY SLOWLY while whisking quickly (I recommend combining your milk and broth ahead of time so you can add it simultaneously). It will look like the mixture is separating, but keep at it and once it comes together add a little more liquid. Eventually you can just dump the rest in.

Return the pot to the stove and bring the mixture to a gentle boil. Allow it to simmer uncovered for 5-10 minutes until it’s thickened a bit. Once you take if off the heat it will continue to thicken.

TIP: If you want your cream of chicken soup extra thick, use 2 tablespoons of flour. (Also use 2 if you’re making cream of mushroom soup. Speaking of which…)

How to make homemade cream of mushroom soup

Cream of mushroom soup uses the same base as cream of chicken soup, but adds in some finely chopped onion and mushrooms right after the roux is made. Just make sure to use 2 tablespoons of flour because you’ll need the extra thickening with the added mushroom moisture.

After the roux has formed, stir 2 tablespoons of onion and about 1 1/4 cups chopped mushrooms (half an 8 oz container) in. Continue to stir for a few more minutes as the onion and mushrooms soften just a bit.

After the mushrooms and onions are no longer raw, take the pot of the heat and stir in the milk and broth like before. Still do it slowly, but it will be a little more awkward with all the chunks in the way. But keep up the whisking as best you can bad it will turn out! Return to the heat once combined and cook for 5-10 minutes, until thickened.

A single recipe makes the equivalent of a 10.5 ounce can of cream of chicken soup, and a little more than a can of cream of mushroom. But when you’re up to the work of making it anyway, you may as well double or quadruple the mix and just freeze the extra for next time.

What are you going to make with your homemade cream of chicken or cream of mushroom soup? I used some of both to make Hawaiian haystacks – so good! 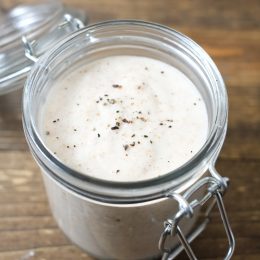 For Cream of Mushroom, in addition to above

So you could make this and freeze it? I would rather have this than buy a can of it but when I am cooking in rush, I have to admit, dumping a can is a lot faster than doing this. If there is a way to have it made beforehand, please explain!! Thank you!!

Hi Jen, great question!! To be honest, I haven’t tried freezing it yet but it’s on my to-do list. I have read similar recipes that say it freezes well, so I am inclined to believe there should be no problems. Let us know if you try it – and I’ll update when I do.

I make the cream of mushroom version above and freeze it in freezer bags flat. I measure it out in about 10.5 amounts in each bag. I usually make about 5-7 cans worth when I make it. It thaws nicely and works great in my opinion

Question- Is this the equivalent of the condensed version(that you would need to dilute to make it into soup for lunch)?

Hi Susan, this makes the equivalent of a can of condensed cream of chicken soup. I haven’t tried diluting it for soup, but I know it works great in casseroles and such!

What would you freeze this in? What kind of container?

Hi Dana! I’ve frozen it in small ziplock bags for single size servings. But you could really any freezer safe food storage container that you’d like.

Do you think using 2% milk instead of whole milk would make much a difference in this recipe?

Hi Tamara, you can use 2% – it will be slightly less creamy but it still works! I even used 1% once and it was just fine.

Would it be possible to use cashew milk instead of dairy milk?

Hi Courtney – unfortunately I haven’t tried it so I don’t know. can you successfully make a roux with cashew milk? If so, then probably yes! Let us know if you try it!

I noticed there is no chicken in the crm of chicken soup but mushrooms in that soup….would it hurt to add small pieces of chicken like you find in the canned version? Also, I typically cook my own chicken and use the natural broth from that…would this also work?

Wouldn’t hurt to add bits of chicken at all – sounds like a great idea! And using your own natural broth should work beautifully!

This looks so easy and so good. I’m making the mushroom tonight as I want a Tater Tot casserole and don’t want to drive to the store for a can of soup! LOL

THANK YOU, THANK YOU, THANK YOU for these recipes!! I can’t tell you how many delicious sounding recipes I have passed up because they called for prepared cream of soup. I will even try to make cream of celery from this recipe. I see a “big batch Sunday” project in my near future.

With lots of appreciation for your work on this 🙂

Love, love, love this recipe!! I did make a few changes to it to work for our family. I used Earths best vegan soy free butter, unsweetened original almond milk, gluten free all purpose flour and portbella mushrooms. It turned out better than I thought possible and I also used my immersion blender. Thanks so much for this wonderful recipe that will be a staple in our house from now on. I also froze mine after measuring out 10.5 oz per baggie.

W this recipe sounds delicious, but way too many words

Thank you for this recipe!!! I haven’t cooked anything that asked for cream of stuff in a long while because of sodium and other chemicals! This will be a game changer..about to cook it up!

Thank you…at last! I have searched for a good alternative to canned cream soups for the longest time. My hubby’s diet is gluten free, so the typical canned versions won’t work, and the gf soups are simply not very good. I used this recipe with gf flour today, and it was perfect. Thanks Katrina…actually, I used it in your chicken and brown rice instant pot recipe. Hubs declared it “a keeper.” 🙂

So glad!! Thanks for the feedback 🙂

Hi, what did you substitute for the milk? Lactose free? Almond milk? Thanks!

Great recipe, I made the cream of mushroom. I made it gluten and dairy free using gluten free flour, olive oil in place of butter and almond milk. I also fried the onion and mushrooms in separate pan and added at the end. Using it in the slow cooker for Lamb Obsession! Mmmm

Made it with 2% because that’s what I had.

I am sorry to complain but far too much advertiseing and not enough getting to the recipe. I just gave up and moved,

Would using corn starch work ok instead of flour?

It will make the end result much thicker. I personally would probably stick with flour.

Hi, Katrina,
It is cold and wet here in Washington state and the time of year for stick to your ribs type meals. I prefer to do home made versions, mainly because home made tastes so much better. I am excited to try this recipe. It sounds so delicious. Thank you for having this recipe for all of us to try. Wish me luck!

Thanks for the recipes. My husband is on a restricted sodium diet. I’ve been feeling very frustrated at the inability to cook as I have in the past. This is a definite game changer!

Add a little rosemary, thyme and parsley too.

Wonderful. I, like you could not go back to the canned again. My mother was placed on a very low sodium diet when she became ill. I had to learn a new way to cook, being from the south.

Just finished making the mushroom soup. Added more milk to turn it into a gravy to simmer and reduce into meatballs. Delicious!

So glad to find your recipe as there are several favorite dishes I have not made for years as I’m on a very sodium restricted diet. Haven’t tried this yet but I certainly will. Thanks

The flavor is GREAT but my veggies were very crunchy. I followed the recipe as shown. I will make it again, but will cook them a lot longer

I male this all the time. What is the difference between cream of chicken soup and chicken gravy?

Hi KJ! Thanks for reaching out. Gravy usually is made from chicken drippings plus a thickener (like flour or corn starch). Cream of chicken soup is made from chicken broth (which is much thinner and less rich than the drippings) plus milk, butter, and a few other flavors. Does that answer your question?

Mind blown! I made both of these today (needed some for your amazing IP chicken and rice recipe)and could not believe how delicious they were. I quit using recipes that called for cream soups because I won’t use them, but this changes everything! Thank you!

Hi Tamara, you can use 2% – it will be slightly less creamy but it still works! I even used 1% once and it was just fine.

This recipe is a definite keeper! I used the Cream of Mushroom version in place of store-bought condensed soup to make Beef Stroganoff. For the flour, I used half white and half ancient grains and my own beef bone broth instead of chicken broth. It turned out most excellent! I’ll be subbing in the Cream of Chicken version in other recipes. Thank you. 🙂