Individual Pear Crisps are a simple dessert with a yummy cinnamon oat filling perfect for kids to have their own!

Slice pears in half down the middle.  (This saves you time from slicing!) You won’t need to peel the pears – pear skin is thin and can be eaten right along with the middle.  It just adds fiber and nutrients! Hollow out the core from the pears.  Mix oats, butter, brown sugar and cinnamon together. There is not enough butter to make it sticky, but it is sufficient for baking.    Pour the oat mixture into the cored pears.  Place pears in a baking dish and Bake at 350 for at least 25 minutes, or until fruit is tender. 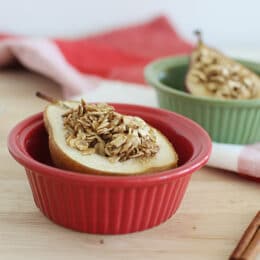 A prison nurse? Wow! I bet that’s an interesting job! And btw, these pears look so delicious! I think I’m going to have to make them for sure! 😀

Wow, I wish I could see his presentation – sounds cool! My pediatrician’s office has all female doctors and all male nurses – how funny is that?

Amy, I would try but I’m hooked on the Good Day Pear Crisp you had last year.