We love a good pork roast in the crock pot! This slow cooker cran-apple pork is a sweet pork just perfect for the holidays. Whether it’s for Sunday dinner or an easy weeknight meal, throw these 6 ingredients in and you’re set!

We decided to take a seasonal spin on the traditional slow cooker pork and make it sweet with cranberries and apples. Add a little cinnamon and sugar and you’ve got a recipe for success. It smells and tastes fresh and festive.

How to make slow cooker pork with cranberries and apples

Start by greasing your slow cooker and chopping your apples into roughly 1-inch slices. Add your pork roast to the crock pot.

Layer on cranberries, sliced apples, brown sugar, and cinnamon. Pour apple juice over everything and set your slow cooker. You can either do 7-8 hours on low or 4-5 hours on high. I’ve tried both and had success.

Now sit and enjoy an almost finished dinner and the festive fragrances filling the air. You’ll know the roast is done when it pulls apart easily when you stick a fork in it. 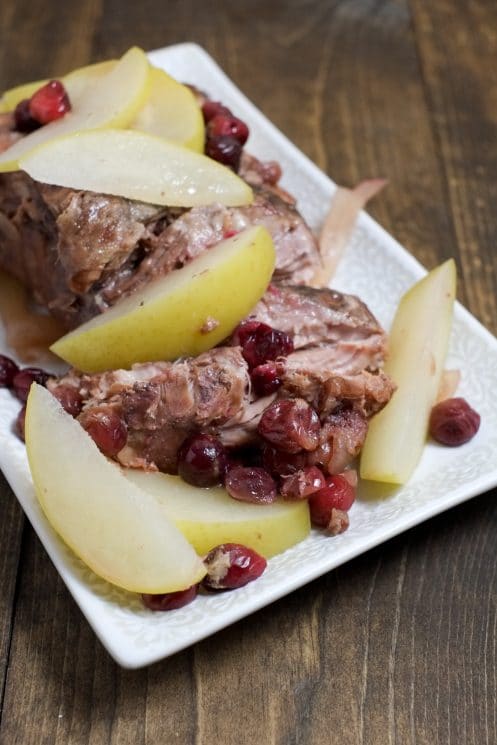 Notes and Variations on cran-apple pork

I made a version of this with a chopped onion on the bottom (which you can see if you look at the pictures closely), but I actually prefer it best without. And it’s easier – less chopping! But if you want to try it, be my guest.

I  used granny smith apples because they hold up well for baking, but other types of apples work too. There are literally hundreds of apple varieties and each has subtle differences, so each would make a slightly unique cran-apple pork roast. Let us know what you try!

The apples in the crock pot will mostly disintigrate as they flavor the pork. So, if you would like to pair the roast with apples, I suggest boiling or sauteing some right before mealtime and serving with the pork. Even sprinkle with extra cinnamon – yum!

I considered using apple cider instead of apple juice. I think it would be extra delicious! But apple juice is more common around the house so it makes for a better base recipe. You can also use chicken broth in a pinch, the pork just won’t turn out quite as sweet. 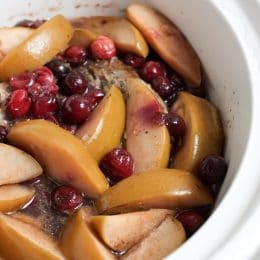 My kids aren’t a fan of cranberries as they tend to be bitter/sour. Is there anything else I can replace those with or can I omit them altogether & how will that
affect the recipe? Thanks 🙂

Hi Suzanne! I completely understand that! I would just omit them and you will be just fine!

In the picture above it looks like the roast has onions under it, but onions are not listed in the ingredients. Does this recipe call for onions?

You caught me, Amber! I made this twice and decided it was better without – so I have some pictures with but didn’t keep them in the final recipe. Good eye!

Hi! I’m making this tomorrow and can’t wait! I have a big crowd and am using a 5 lb pork roast. Should i double the rest of the ingredients?

What kind of apples work best?

I couldnt find fresh cranberries so I used blueberries . It still came out good but no tartness. Next time I will look in the freezer section in the grocery store for frozen cranberries. We love this recipe…I also added sweet potatoes but not many as I am the only one that eats them. So good!