Feel like cooking up something hearty and comforting, but don’t want something so terribly unhealthy? Look no further! This chicken pillow makeover has all the creamy deliciousness of the original but uses much healthier ingredients.

Chicken pillows make a great crowd-pleasing dinner! They’re also portable so they can be eaten on the go or packed easily in a lunch.

So what makes this chicken pillow recipe healthier?

Our version replaces full-fat cream cheese and butter with low-fat cream cheese and Greek yogurt. Result: less fat and more protein, but still oh-so-creamy. We also made our own whole-wheat crescent rolls rather than using the store-bought canned variety, which have 1.5 grams of trans-fats per roll, and between 4-6 grams saturated fat. Wowza. Finally, we opted for egg wash and bread crumbs on the outside of the pillows, rather than butter and cracker crumbs.

Proof the yeast in warm milk before getting started on anything else because it will need to sit for ten minutes or so. Heat the milk in the microwave for 30 seconds or so, until warm but not scalding. Then add the yeast, mix it up a bit, and set it aside to sit. You’ll know it’s ready when it bubbles just a bit. Mine didn’t froth as much as when I proof yeast with warm water, so don’t fret if it doesn’t look “normal.”

Meanwhile, mix 1 1/2 cups flour and salt in a medium-sized bowl. You’ll probably add more flour later, but I always start with less to make sure I don’t get too much. Then make a hole and fill it with the butter, egg, and honey – but don’t mix just yet.

Once the milk mixture is ready, pour it into the center as well and proceed to mix all ingredients. Add more flour as you need, getting it to the consistency where you can knead it but it isn’t really dry. I ended up using a total of two cups of flour overall. Knead the bread on a floured surface for around 5 minutes, or until  the dough has come together nicely and is a bit elastic.

Grease a large bowl and put the dough inside to rise. Cover with a lid, plastic wrap, or a wet cloth. Allow to rise in a warm area for an hour or so, until doubled.

Now to make the filling. You’ll need two large chicken breasts cooked and then chopped into small pieces. I roasted mine in the oven with a little olive oil and salt & pepper. This can easily be done while waiting for the dough to rise, or you can have them prepped and ready the night before.

In a medium bowl, combine cubed chicken, warmed cream cheese, Greek yogurt, garlic powder, salt, and chopped green onions. And that’s it – that’s your filling! You can make it your own by adding spices like Italian seasoning, or even sprinkling in some cheese.

If you really want to go the extra mile, you could definitely add veggies like spinach, mushrooms, peas, or even some finely chopped broccoli. If adding veggies, they’ll be more tender if you sauté them for just a few minutes first.

Once both the filling and the crescent dough are ready, split the dough into twelve equal balls and roll them out fairly thin until they’re maybe 8 inch circles. You don’t want them to fall apart, but don’t want the bread to be too thick either.

Split the filling equally among the balls, plopping into the very center of the circles. Then fold the sides of the circles up and around the filling to create a pillow. Try and press the dough together so it seals well. Some of mine didn’t seal all the way and some mixture escaped (although this made them look quite appetizing and is not the end of the world).

Flip the pillows over so the seam-side is down, and then brush the tops and sides with egg white. Roll the brushed rolls in bread crumbs and place on a baking sheet. Cook at 350*F for 20-30 minutes, until the tops turn golden brown.

Allow to cool for a few minutes before removing, cutting in, and devouring! 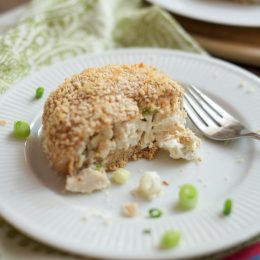