Some of the best ideas, are some of the easiest ideas!  I got this yummy snack idea from a participant in a nutrition class I taught last week.  She said she loved slicing up apples, putting them in a baggie, shaking cinnamon over them, and chilling in the fridge for a few hours.  So, we tried it: 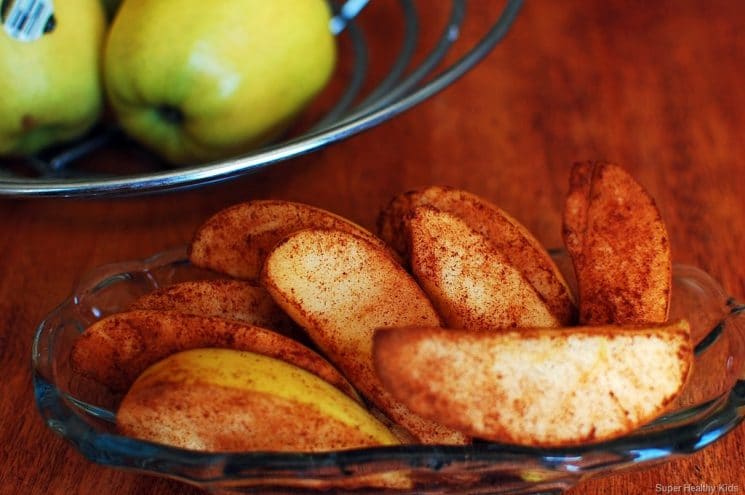 I love this snack, because it’s a great treat for kids standing with the refrigerator door open, wondering what they could possibly snack on.  Healthy food for snacking is always the best choice, but sometimes they don’t want to take the time to chop, wash, or season foods to make them yummy, when they just want something now.  Plus, this healthy snack tastes like apple pie!  MMMMMM

Thievery during the photo shoot above. 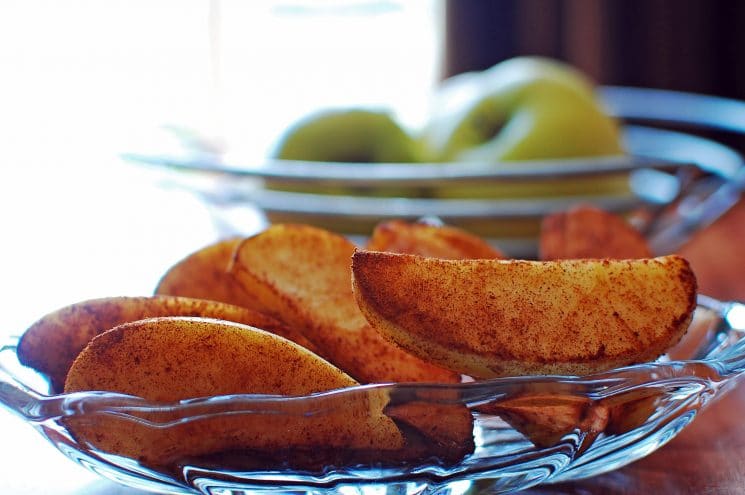 So, have some cinnamon apples ready for your kids after school or play.Remember, an apple a day keeps the doctor away.  But, did you know also, that apples can help your kids regulate their blood sugar?  The phytonutrients found in  apples help prevent spikes in blood sugar! (source).

Love this! Going to go make some right now!

These will be going in my fridge tonight! What a great idea! Sometimes the simplest ideas are the best one!

Great fast and simple idea!! Never thought to try it like that but bet it will be excellent! I have an awesome recipe for Baked Apples that are delicious too, if you have the extra time! YUMMY!!

This is a great idea and easy enough the kids can do it themselves. we have been eating apples more lately. thanks

Amy, there are many things I like about your blog but I’d like to point out one thing I appreciate is your instructions. You have a yummy photo of cinnamon apples that I can’t wait to try and instructions that I can’t mess up!

Hi! Just wanted to say I made the apple smacks and they were delicious as well as your veggie stack omelet. My family enjoyed them. I blogged about it here and hope that you do not mind! http://brokenresolutions.wordpress.com/2011/08/19/the-one-thing-that-keeps-me-off-my-diet-%e2%80%a6is-food/

Thank you so much Katie! Your post was so kind and I’m flattered you like my blog 🙂

This looks SO awesome! I can’t wait to try it.

This is one of our favorite snacks! My kids gobble them up! In fact, we took some in a bag for our picnic dinner tonite. So simple. So healthy.

This is a great way to conceal the “browning” of apples when they get cut. Somehow my kids think they’re “bad” if they discolor from air exposure so I’ll definitely try this trick!

Thank you so much! It is such an awesome idea! All my three children made the entire plate disappear before me and my husband even got a chance to try! Cinnamon made its magic! Is there any other kind of fruit which will go well with it?

I just found this blog today and I have been staring at it for about 3 hrs. Thank you so much!!! You have helped so much already, even with todays lunch..

[…] The cinnamon fries were easy enough.  We’ve done it before on this post. […]

[…] time I am going to try just using cinnamon like Super Healthy Kids did. Eliminating the sugar would definitely make the apples healthier and the cinnamon apparently […]

Thank you for a yummy snack that even my picky 11 year old likes!

My husband has one in his lunch every day. Healthy and yummy!

Ah, the simplest things are often the bestest things. This snack idea is delicious proof! Sharing this everywhere!

Brilliant! Thanks for passing this along! I will be making these today! 🙂

I’ve sent these to school with my kids for years. No need to prevent browning if they’re brown from cinnamon! Plus, without any added sugar, it doubles as a dessert! ❤️